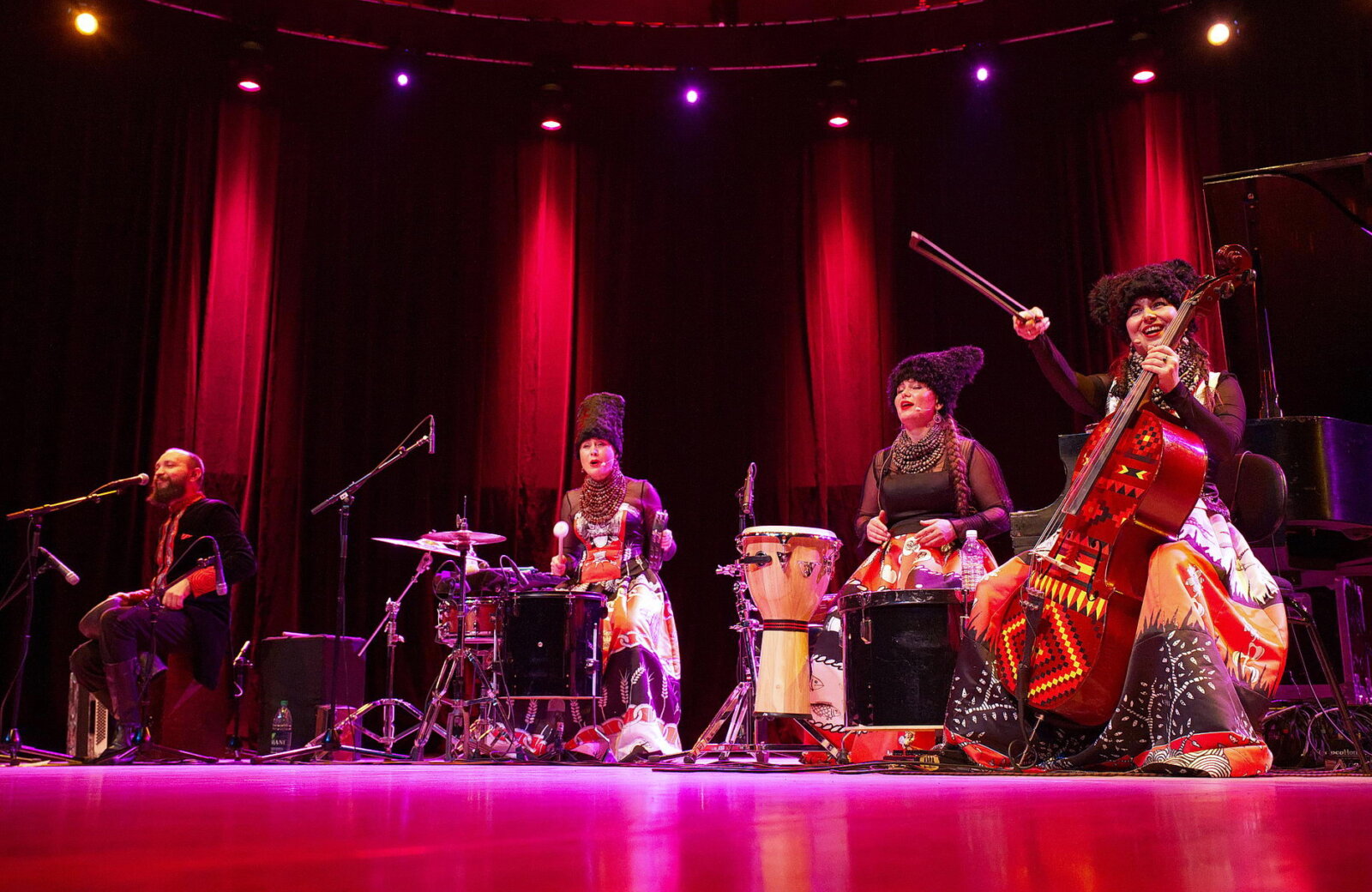 EDMONTON, Canada — They call it “ethno chaos.” This Ukrainian band takes sounds and voices from all over the world and blends them with Ukrainian folklore in a genre that is hard to define.

DakhaBrakha, which means “give and take” in old Ukrainian, stemmed from Kyiv-based experimental Dakh Theatre 15 years ago. The four musicians in the band, Nina Garenetska, Olena Tsybulska, Iryna Kovalenko and Marko Halanevych, play a variety of instruments, including cello, piano, percussion and darbuka, accordion, jew’s harp and the didgeridoo. All four are trained in folklore and ethnomusicology and learned about their music from its roots, researching their material from village to village in rural Ukraine. Now they are sharing the sounds of old Ukraine with the world.

Their North American debut came at Toronto’s Luminato Festival in 2013, and since then have had 18 tours on this side of the Atlantic, making them now perhaps Ukraine’s best-known cultural ambassadors.

The band returned to Edmonton for the third time for a sold-out Oct. 17 concert at the 1,700-seat downtown Francis Winspear Centre for Music. The audience burst into applause with the first tune, and after an almost two-hour-long concert, didn’t let the musicians leave the stage without an encore.

Fans may not have known the words well enough to sing along, but the wild energy was almost palpable as the band played old and new tracks to the cheering crowd, some of whom couldn’t help but dance for most of the show. And fans not knowing the words doesn’t faze the band: while introducing one song built around Shakespeare’s Sonnet Number 7, frontman Marko Halanevych quipped, “nobody understands the words, wherever we sing it.”

Despite being relatively new to the world music scene, DakhaBrakha’s music is already internationally recognized and acclaimed. Not only have they performed in almost 40 countries around the world, they have also appeared at the Sziget festival in Hungary (one of Europe’s largest music festivals) and Australia’s Womadelaide.

In 2018, one of their songs was used in a commercial for David Beckham’s grooming brand House 99. The same track — the song Shcho Z Pid Duba (What From the Oak) — was also included in the soundtrack to the third season of Fargo, the world-famous television series by the Cohen Brothers.

“We are usually on the road and abroad for one to one and a half months at least three times a year,” Halanevych says after the Edmonton concert. “This time we started in Paris, then went to Brazil where we also worked on our new album, the U.S. and eventually came to Canada.”

While touring the world, the band not only introduces the audience to Ukrainian folk songs but also to its traditions. In some of the cities, the band members have special workshops called Borscht Party where Halanevych cooks and talks about Ukraine while the three ladies sing.

“Every time we cook about 10 liters of borscht, because you never know how many people will show up. But, honestly, having just a traditional concert is easier,” Halanevych says laughing.

Even though their songs can be hard to transcribe, even for native Ukrainian speakers because of all the archaisms, people recognize it for its vibrant energy, impressive vocals and unexpected sounds like birdcalls and whistles which layer seamlessly into the music. However, the band is also easily recognized by their particular stage look — the three ladies always perform in black lamb-fur hats and a dozen beaded necklaces, while Garenetska’s cello is dotted with Ukrainian embroidery.

“At first, the girls were complaining about the hats as it was hot at times,” Halanevych says smiling. “But I haven’t heard anything lately. I think they’ve become unseparated.”

The inspiration for their dresses came to Ukrainian designer Olga Navrotska after she saw the band’s music video for their song “Carpathian Rap.” The black, white and red dresses feature Ukrainian patterns and traditional symbols such as wheat stalks, birds and flowers.

DakhaBrakha has released five albums since their debut, Yahudky, in 2007. Their last album, The Road, was released in 2016 and includes tunes from the Donbas and Crimea occupied by Russia, including songs of the Chumak caravans.

Even though tumultuous times often prove fruitful for artists, DakhaBrakha mentioned conflict was never an inspiration for them, rather the opposite. The work was going slowly until their founder and spiritual guru Vladyslav Troitskiy suggested using songs from the different parts of Ukraine, thus uniting the country in one album.

The band previewed several of their new tracks at the Edmonton concert, and the Kyiv audience will have a chance to hear their new album in its entirety on Dec. 6. “It’s so hard to define its style. It’s different, has a little bit of soul, swing and Ukrainian poetry,” Halanevych explained, adding that the quartet also plans to work on a special project — a requiem for the fallen soldiers in Russia’s war against Ukraine.

Speaking about touring North America, Halanevych says that they always get inspired by its audience. “They are probably our favorite audience after Ukrainian, of course. So ready to grasp everything, understand every little hint and very emotional.”

The musician also notes that their listeners have been changing and becoming more knowledgeable about Ukrainians and Ukraine. “That’s what we want — for people to learn about our country, we would love to get them interested. Plant the seeds of Ukrainian all over the world.”