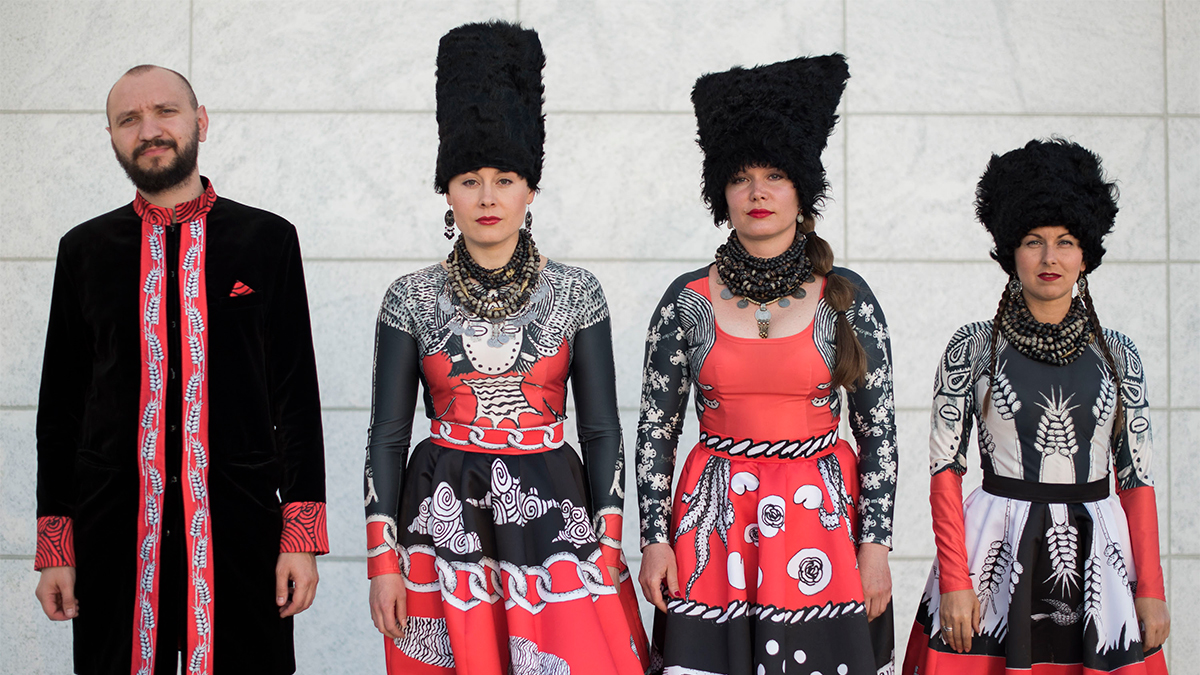 We start with a brief brush with greatness. Tonight’s headliners first came across my radar a few years ago at Womad. Your humble reviewer was helping out in the records and merch tent at the festival when approached by a customer. “Have you heard this lot next door? Absolutely amazing.” I popped my head out of the tent to see the large Siam Tent next door going absolutely crazy. The cause of this mania: Dakhabrakha. The knocked out customer: Robert Plant. If they’re good enough for a casually passing rock god I thought, they’re good enough for me.

Now, they find themselves at The Lanes, who credit their 2017 performance at the venue as kickstarting their recent renaissance as a live music venue. Tonight the place is absolutely heaving.

The cause of all this excitement? Well, they are quite a thing. The quartets’ roots in their Ukranian homeland lie in experimental theatre. Their show tonight is as much a theatre performance as a musical one. Their schtick is to take reworked folk songs from Ukraine and put them in a mixer with a range of contemporary styles. At various points, flickers of hip hop, a spike of punk, soul ballads and a blast of free noise improvisation. It is a winning and knowing concoction of traditional performing villagers and the avant-garde.

Next, we need to talk about the headwear. The three female members, Iryna, Olena and Nina are resplendent in tall black fur-lined stovepipe hats. Think a line of Marge Simpsons prepared for a Ukranian winter. They all wear traditional garb with the women in vivid, red and white floor length dresses. Marko’s menswear choices are positively downbeat Ukranian trad by comparison. Nina’s cello is decorated in a bold geometric design. You’d notice them if they walked past you on Park Street.

Their instrumentation is some sawing cello, dramatic drums, a couple of variously clashing or meditative accordions. There’s also a range of traditional instrumentation which looked as though they probably have been sourced from all over the place. Musically, the early part of their set is mostly calm, intimate yet passionate folk music. They occasionally tease the audience with hints of more upbeat percussion but this often resolves into a soulful avant-garde cello interlude. As the set progresses the percussion comes more to the fore and The Lanes’ dancefloor becomes a mass of manic, flailing limbs.

The vocals are extraordinary too. In one section we could be in a menagerie as various bird and animal sounds are explored. Next, we have parts of near operatic drama from a female voice spiralling into a melancholic dirge of polyphonic harmony. Marko’s male vocal parts are an often almost cartoonishly high soul croon alternating with booming bass. There is high drama here and as uncompromising a vocal variety as you’ll find at any show.

The Lanes audience loves them. Their encore is their best known tune which translates as Baby. It is another soothing falsetto soulful cry to set us out into the Bristol night. A nice comedown after the percussive fire of the end of their set. They really are like nothing else. If you think Björk might be a bit mainstream for your tastes these days, then give Dakhabrakha a go.