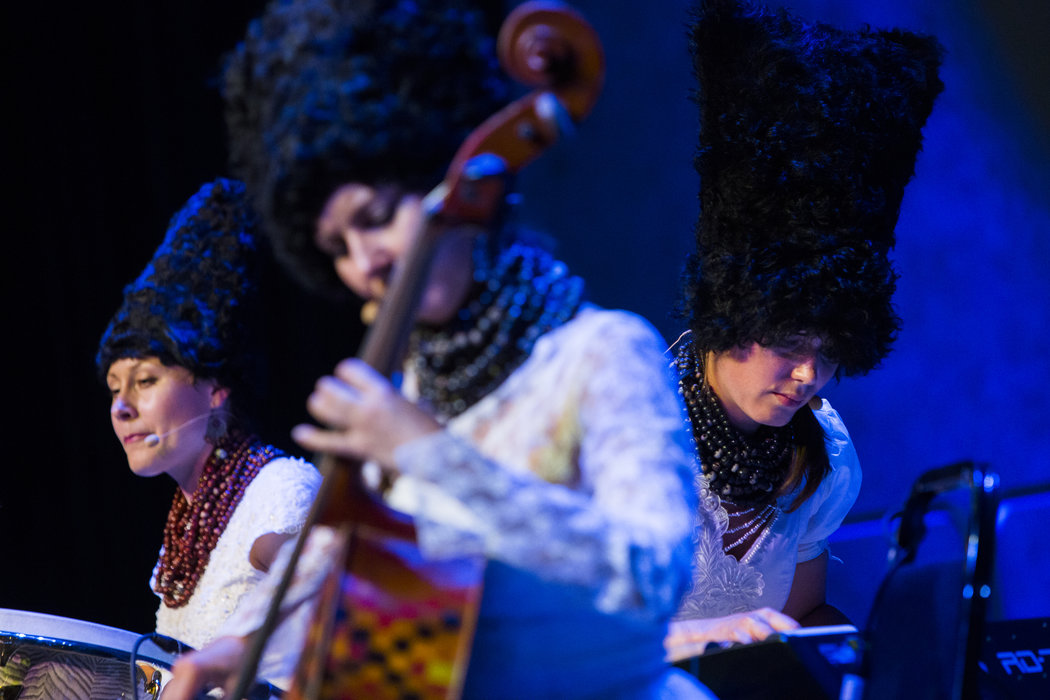 “That mesh of ancient and contemporary is DakhaBrakha’s mission. DakhaBrakha — which means give-take in old Ukrainian — has researched rural folk songs across Ukraine, then reshaped them: first as the house band for a theater company in Kiev, and now on the international circuit.”

Nina Garenetska makes an unlikely rapper. Along with the two other women in the Ukrainian band DakhaBrakha, which performed on Monday night at Brookfield Place’s Winter Garden, she was wearing a white lace wedding dress, a tall black lamb-fur hat and half a dozen beaded necklaces. Ms. Garenetska was also holding her cello, painted with bright geometric designs.

And while Marko Halanevych played mournful accordion chords, Olena Tsibulska tapped a slow beat on a tom-tom and Iryna Kovalenko switched between twanging a jaw-harp and playing piano, Ms. Garenetska was bowing long tones on her cello and rapping verse after verse. But the lyrics weren’t urban: They were from a traditional Carpathian mountain song about a prospective bride’s less-than-stellar suitors.

That mesh of ancient and contemporary is DakhaBrakha’s mission. DakhaBrakha — which means give-take in old Ukrainian — has researched rural folk songs across Ukraine, then reshaped them: first as the house band for a theater company in Kiev, and now on the international circuit.

The songs are often from ritual occasions, like weddings and funerals. DakhaBrakha revels in the potent, sometimes pungent chordal singing and counterpoint that overlaps Eastern Europe and the Balkans; the three women’s voices, solo or merged, are at the core of the music. But the old songs are recast and kicked into gear by nontraditional rhythms and strategies: an extended Minimalist drone in one song, a beat from Senegal or Brazil or Jamaica in others, and a pizzicato cello bass line hinting at American R&B in the English-language song “Specially for You,” which had Mr. Halanevych singing in soul-man falsetto.

There’s playfulness, too. One song began and ended with long, quiet stretches of simulated birdcalls, as if DakhaBrakha had happened onto the music in a forest.

Perhaps the theater affiliation taught DakhaBrakha how to pace its dramatic ups and downs: By the end of the set, across the language barrier, listeners were clapping and whooping along. The finale was a love song, “Baby,” in English and Ukrainian. Before it, Mr. Halanevych unfurled a Ukrainian flag and dedicated the song with “love from free Ukraine.”

The concert was part of the Global Beat Festival presented by Arts Brookfield and curated by the world-music presenters Live Sounds. Sharing the bill was Poor Rich Boy, an indie-rock band from Lahore, Pakistan, that has been touring the East Coast under the State Department’s Center Stage cultural exchange program. Its music looks West: Nearly all of the lyrics are in English, set to gently building folk-pop and to the spiraling guitar lines and shifty meters of psychedelia and progressive rock.

But the songs have their own distinct perspective. Poor Rich Boy’s two songwriters and lead singers, Shahzad Noor and Umer Khan, are both fervent and oblique. Their lyrics glimpse tensions and longings, both personal and societal; they touch on affection, sorrow, uncertainty and violence, offering more conundrums than lessons. They sang a song, “Kaghazi,” in Urdu, whose lyrics, about friends who had become enemies, offered “We’ll burn our hearts to light the way for them.”