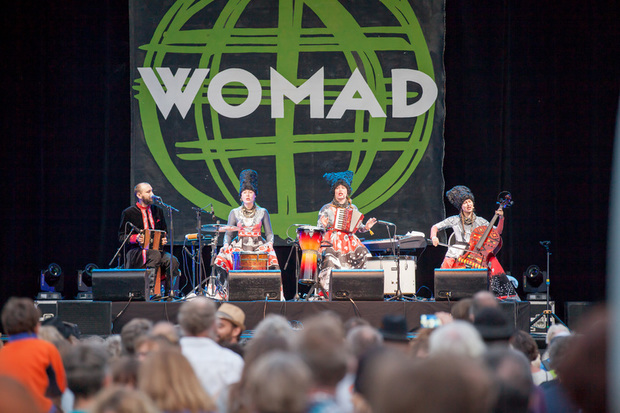 Sunday afternoon, March 20, saw Ukrainian quartet DakhaBrakha (which means ‘give’ and ‘take’), deliver a set that was not only visually fascinating, but equally, sounded like nothing one has encountered before. The fact that the band describe their music as ‘ethno-chaos’, gives the audience a clue as to what to expect.

DakhaBrakha first performance on the Brooklands stage on the opening Friday night was an indication that this band was arguably the ‘discovery’ of the WOMAD weekend. The crowd loved them and after their show there were long queues of punters at the CD signing tent buying their music.

The four musicians formed 12 years ago in Kiev, playing music for live theatre. They eventually went out on their own producing a repertoire that is as exotic as it is unique.

DakhaBrakha consists of a male vocalist who plays accordion, harmonica…and even a didgeridoo. The rest of the band consists of three female musicians who play a collection of instruments including a brightly painted cello, hand held drums, assorted percussion, ukulele and a weird looking flute.

The female vocals are as beguiling and distinctive as their stage costumes. They are dressed in long white dresses, heaps of necklace ornaments and incredible tall black hats, that must have been brain numbingly hot in New Plymouth’s heat.

They look like they have escaped from the pages of a Dr Seuss book!

Their music is spell binding and it’s almost impossible to pin down what has influenced their repertoire. It’s obviously derived from Ukrainian folk music but it has touches of Eastern and Indian instrumentation that only make it more difficult to describe.

All I could think of was that Tom Waits would love this band, especially their fantastic vocal arrangements, instrumentation and addictive stage presence.

DakhaBrakha have played extensively outside Ukraine, including the American indie-rock Festival Bonaroo and Glastonbury, where on both occasions, they reputedly stole the show. It’s little wonder that DakhaBrakha achieved a similar audience response when they took to the Bowl Stage at Pukekura Park.